Nestled in the Nittany Valley between Bald Eagle Mountain and Mount Nittany, sits a large sprawling industrial complex positioned in the heart of Bellefonte, Pennsylvania. Along picturesque Spring Creek, this artefact from a former era, is listed on the National Park Services Registry of Historic Places.

Because of this formal recognition of the property’s historical, architectural, and archaeological significance, any adaptive reuse efforts would require thoughtful consideration.

Abandoned for several decades, the building had fallen onto tough times. The deteriorating relic had a collapsing roof structure weathering its interior wooden structure with exposure to the harsh elements and causing the interior floor structure itself to collapse. On the day of our tour, there was fresh snowfall inside the building. The surrounding brick walls, aged with patina, were in good structural condition and only required light restoration.

Project Advancements / Sustainability
The historic nature of the project required careful investigative attention. Designers strove to maintain as much of the richness through reuse or restoration and only consider replacement when necessary. The collapsing wood structure was beyond its usefulness for the project but was carefully dismantled by an Amish salvage contractor for recycling into wood furniture and flooring.

Any modifications proposed to the exterior had to made with sensitivity and historic reference. The preservation plan was analyzed by the Bellefonte’s Historic Architectural Review Board.

Project Background
A large sprawling industrial complex of nearly 20 adjacent buildings, positioned next to Spring Creek Bellefonte, Pennsylvania, was originally constructed to manufacture wooden matches. The Pennsylvania Match Factory, founded in 1899, was one of the leading producers of wooden matches during the first half of the 20th century. The factory building opened in 1900, and within one year was the eighth-largest producer of wooden matches in the United States. The company was sold to the Federal Match Corporation in the 1930s. By World War II, the company had merged into the Universal Match Corporation. The factory closed in 1947 because of competition from book matches and lighters. The faded Federal Match Corporation name can still be seen on the outside of the building. The Match Factory complex saw numerous other uses through the years, eventually leading to near abandonment.

Design Concept
From the outset, it was important to have a highly visible connection to the two levels of the library, promoting library patrons ease to navigate the stacks along with various study and research options.

The design team felt it was important from the out-set that the interior coordinate with the historic nature of the envelope. The new library space would benefit greatly from natural light. With historical documentation of its former features, the design team reimagined the space as a connected, light filled inspiring space. New wood trusses were designed to recreate the former clerestory. New steel columns, articulated with details to emulate iron columns from a former era hold up the new trusses. The existing brick walls remained exposed to reveal their patina and tell the story of their past. The architectural team cleverly developed a stair design, completely open to view, to transform and become a fire escape in the event of an emergency. The team focused on patron flow through the library, arranged stacks to optimize material display, and organized strategic locations for key staff. Other modern materials were recruited to further complement the historic fabric. A wood floor grounds the area under the atrium and pressed vintage copper ceiling tiles continue the historic theme.

As one of the world’s largest and most accessible collections of philatelic literature, the American Philatelic Research Library’s extensive collection includes books and journals about stamps and postal history, as well as historic reference materials of philately and related subjects, like transportation and geography.

The new home for the immense collection combines resources from several locations. The American Philatelic Research Library was temporarily housed in two separate areas; however, the publicly accessible part of the library was inadequately sized for the quantity of materials possessed and a significant portion of the resources had to be housed several hundred feet away, in a staff-access-only archive area.

The new library combines these Ultra-rare, one-of-a-kind materials for the public in a space that is inspiring. The APRL’s collection includes more than 23,000 book titles, 5,700 journal titles, and nearly three miles of shelving. 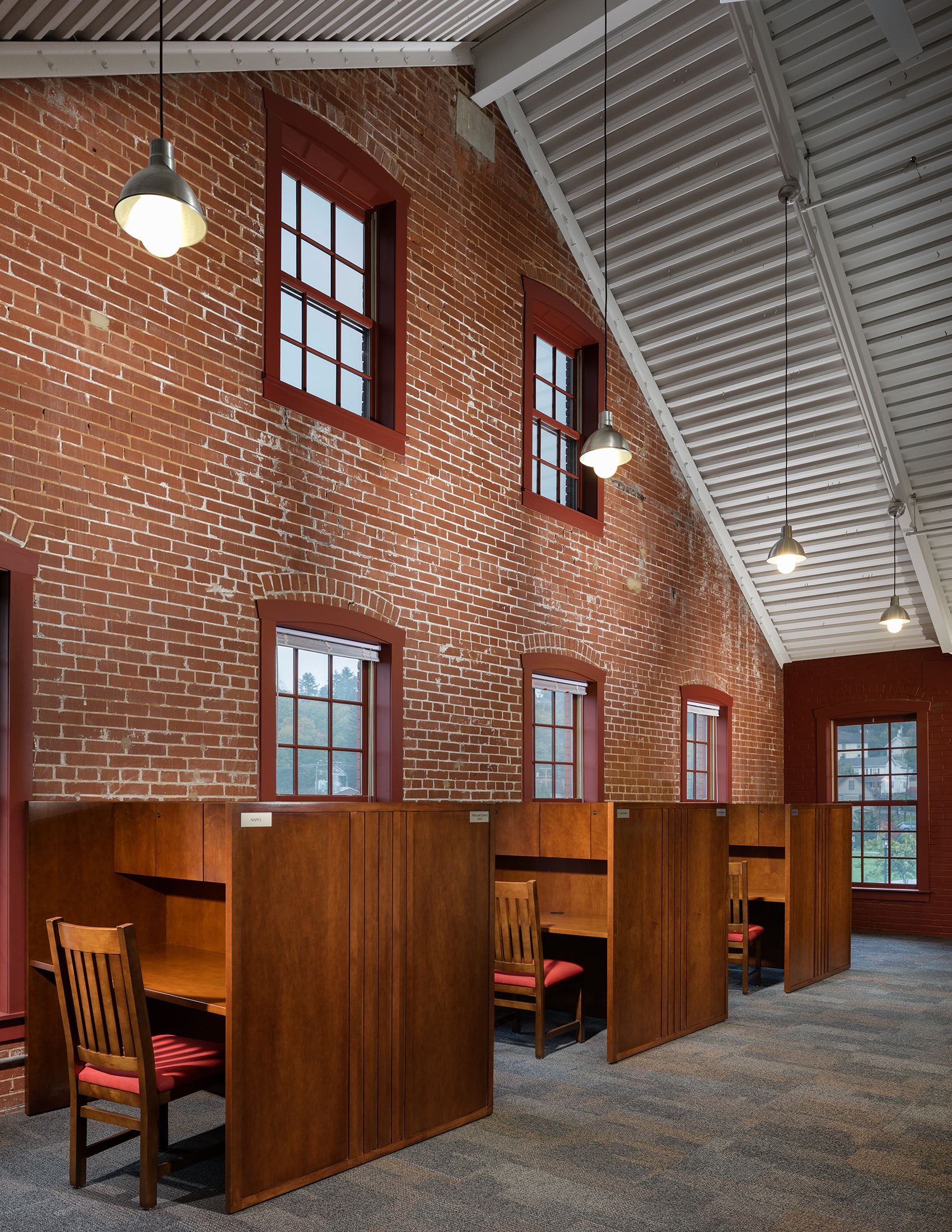